Common Canine Superstitions, Dog Myths & Misconceptions People have been amused by superstitions since the beginning of their existence. They can be found regarding most any topic you can imagine. Superstitions about dogs and involving dogs are popular and many people believe these superstitions are factual without a doubt. Some superstitions are said to be unrealistic however some people would beg to differ as they believe in superstition and consider them factual in most cases. Although superstitions are not nearly as accepted as they were centuries ago, there are two superstitions involving dogs that are still widely spread in parts of the world. A Howling Dog A superstition that most people have likely heard at some point in their life due to its popularity involves the dog's howl and the death of a sick person. The superstition supposedly originated in Egypt. The belief of this superstition is also noted by the Romans and Greeks as well as the Hebrews and possibly others. Whilst each of these were believers of the superstition some of them were known to have different interpretations of what the dog's howl actually indicated. Most believers accepted the notion that a dog's howl heard near the home of a sick person indicated that the person would die soon, however the Romans believed that the dog's how was and indication that something evil would occur that would result in a death. A few historical events that are supposedly related to this superstition have been noted. The Egyptians were likely made aware of this superstition and accepted it as a fact due to the appearance of Sirius (known as the Dog-Star) directly prior to the flood caused by the Nile River in Egypt. It is also likely that after the Egyptians accepted this superstition into their culture that it spread from that to the other areas. The Romans may have accepted this due to the howling of dogs noted just prior to Caesar being killed. Dog Licking Heals Wounds Another widely known superstition involves the licking of wounds by dogs which is believed to have originated in the Philippines. The belief of this superstition is that if you allow a dog to lick your wounds then they will heal much more quickly. 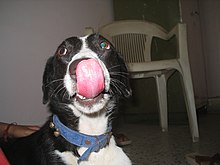 This superstition is often referenced as an "Old Wives Tale". Other Common Dog Superstitions Although they are not as widely known there are many superstitions that are still circulating the world and some which are still believed to be true. Many of these superstitions have lost their origin throughout their passage from one generation to the next and have many different origins if you asked various people. Whilst their origins may be puzzling, the fact that they are worth discussing even though they are likely fictional makes them worthy of being mentioned. Whilst it is generally the black cat that is considered unlucky, in some places people believe that black dogs are the ones who bring you bad luck. Alternatively, if you see three white dogs, it is considered to be good luck. Most people would not tolerate a strange dog walking into their home although in some places people accept the dog as an indication that they will soon meet someone new who will be a great friend to them. See the most famous dog quotes and sayings.